Joined Jun 8, 2016
·
537 Posts
I have noticed far more negative than positive feedback on G70 lease deals. Choosing to BUY, over the big down payment and high monthly's for the next 3-years, is clearly a better option.

A $1,000 rebate on signing does help those monthly payments, along with the possibility of negotiating it down a tad more.

Mind you the Genesis G70 comes many years LATE to the segment, so venturing into CPO territory can highlight on better value elsewhere. New for new, the G70 offers a lot but it seems that corporate and its dealers are banking on the fact this G is unlike the rest it sells and have ever sold. In addition to offering high demand features offered elsewhere. Its a well configured sport sedan.

Not offering competitive lease conditions isn't helping and in fact sending people to what the G70 is pitted against, is no wonder they seem to be dying (I rarely spot them, sales are low...they don't exist in the mind of many). As Genesis works to establish a larger dealer foot print, we might see a lease craze commence, along with whenever buying momentum slows. Alex on Autos spoke on it as well back in November 2018. 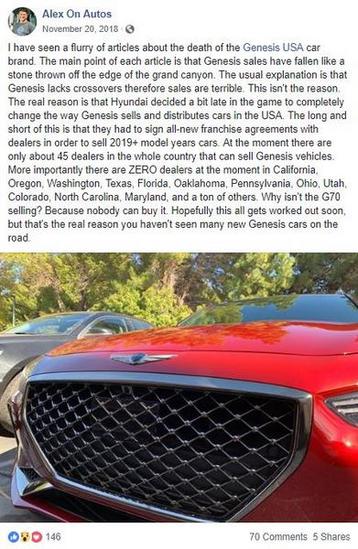 As for the absurd numbers lease 'deals' Genesis is trying to pass off (feel free to include your numbers), I have seen monthly payments go get very close to $700, enough to lease... an Audi S4, Mercedes C43 AMG and essentially vehicles of a much higher caliber and class. Personally I wouldn't go over $2000-3000 at signing and $400-450 a month. Beyond that Genesis can take a hike. Kia Stinger lease deals are actually deals. I'm told the tuning of both the G70 and Stinger created two very different models among the other things you're giving up if going to Kia. At least you won't be making monthly's that often apply to $70k vehicles.